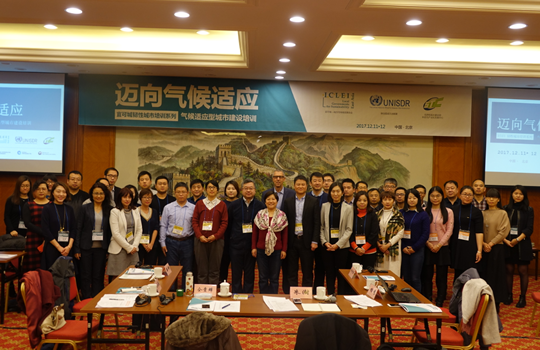 To support Chinese cities in exploring climate adaptation solutions and developing action plans based on local needs, ICLEI East Asia, the United Nations Office for Disaster Risk Reduction for Northeast Asia and Global Education and Training Institute (UNISDR ONEA/GETI), and the Center for Technology and Industrialised Development of the Ministry of Housing and Urban-Rural Development of PRC, jointly organized a 2-day training “Toward Climate Adaptation – Urban Climate Adaptation Training for Chinese Cities” in Beijing on 11-12 December.

The training was moderated by Shu Zhu, Director of ICLEI East Asia. Guichan Tong, Director of the Center for Technology and Industrialization Development, MOHURD, gave the opening speech and highlighted the characteristics of cross-sectoral and cross-industrial work of urban climate adaptation, encouraging pilot cities to establish effective coordination mechanisms.

As a representative of developing countries, climate patterns in China are complex and diverse, and climate vulnerability is intensified. In order to enhance urban climate adaptation and avoid annual natural disaster losses caused by extreme weather such as floods and droughts, the National Development and Reform Commission (NDRC) and the Ministry of Housing and Urban-Rural Development (MOHURD) jointly issued the “Urban Climate Change Action Plan” in 2016, and announced the first group of 28 climate-adaptation pilot cities in the country in the following year. The pilot cities are now actively working on climate adaptation works.

Tong Jian, Chief Expert, and Jiangqing Zhai, Associate Researcher from the National Climate Center, gave a joint speech on the trend of urban climate disaster risks and preliminary assessments of risks and resilience of 293 cities in China.

Xiu Yang, Principal of the Department of Policy and Regulation of the National Center for Climate Change Strategy and International Cooperation (NCSC), analyzed the progress and deficiencies of current pilot works and gave further advice to the pilot cities in terms of coordination mechanism construction, risk assessment, objectives and action settings.

Xiyan Ren, Deputy Chief Engineer of the Water Resources Institute of China City Development Academy, explained the relationship between urban planning and climate adaptation and emphasized that consideration of climate change should be included in long-term urban planning. In supporting the city representatives to better understand the concept, Gawler first gave an in-depth explanation of the differences between climate mitigation, climate adaptation, and urban resilience, and their inter-linkages. Then, he introduced the methodology of ICLEI Climate Adaptive Cities and guided the representatives to, step by step, analyze the climate change challenges and potential risks their cities are currently facing.

ICLEI Climate Adaptive Cities contains three modules: Analysis, Action, and Acceleration which could be subdivided into nine major steps and dozens of decompositions. Gawler said that it is normal for local governments to take months, or years, to go through the entire process. While the half-day training could only provide a preliminary analysis of the current dilemmas local governments are faced with, the session has prompted the representatives to rethink the climate threats and reconsider the entities and personnel to be involved, and the stakeholders to be consulted in developing of local climate change adaptation plans. On the second day, Ana Cristina Thorlund from UNISDR ONEA-GETI introduced the “Making Cities Resilient” campaign to the representatives, along with the Disaster Resilience Scorecard for Cities developed by UNISDR. Through practices and group discussions, city representatives had not only learned to use new tools but had also networked with participants from other cities.

The ICLEI East Asia Secretariat will continue to provide Chinese local governments with training and capacity buildings on climate adaptation. By walking into local communities, the Secretariat will assist cities in formulating climate change adaptation actions based on local needs, foster knowledge exchange, and support international cooperation in moving towards climate-resilient cities. 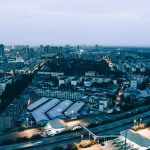