Over 400 disasters were recorded across the world in 2018, 45% of which took place in the Asia-Pacific Region, causing an average of 800 deaths each month, and around 70,000 people affected each day in the region. Displacement associated with disasters in the region accounts for 60% of the global total displacements.

To enhance resilience in withstanding catastrophes, most countries have begun moving from “disaster response and recovery” to “pre-disaster preparedness and mitigation.”

Yanping Shi, Deputy Director-General of the Department of International Cooperation and Rescue, Ministry of Emergency Management of China, presented the country’s 5-Year National Plan on Disaster Reduction and Prevention and introduced the Ministry of Emergency Management, which was recently established in March 2018, to take the leading role in coordinating 32 agencies in natural disaster prevention, reduction, and response.

Paul Gilbert Valderrama of the Philippines Red Cross shared their program of forecast-based financing, which enables access to humanitarian funding for anticipated disasters and their impact prevention. With typhoon as an example, four different scenarios were developed during monsoon seasons in the Southwest and Northeast for the potentially affected 19 provinces. Prioritization of risks includes loss of lives, loss of income of farmers and fishermen, and household damages, which were addressed via Shelter Strengthening Kit (SSK) simulation, early harvesting of agricultural products, and livestock evacuation.

ICLEI first introduced the notion of “Resilient Cities” in 2002, which supports urban development that enables cities to absorb and recover from any shock or stress including demographic changes, environmental emergencies, natural disasters, climate change impacts, and any other unforeseen challenges. “For developing countries, a single major disaster can set back healthy economic growth for years,” said Maiojie Sun of ICLEI East Asia as she presented ICLEI’s methodologies, tools, and platforms for urban resilience to the floor. “This is why resilience is key to sustainable urban development.”

“There is an increase of disasters in ASEAN, in terms of severity and frequency,” said Intani Kusuma from the ASEAN Secretariat. “Thus, it is urgent and important for ASEAN to build its resilience,” said Kusuma. She particularly appreciated the China-ASEAN forum for providing a platform for countries’ governments and experts in the region to exchange knowledge and best practices in disaster risk management. 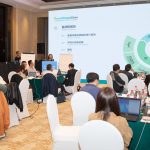