Shortly after the powerful Typhoon Lingling swiped across the Korean peninsula, causing three human lives, flights canceled, and tens of thousands of homes left without power in South Korea, Typhoon Tapah battered the southern part of the country the evening before the International Urban Resilience Forum Seoul 2019 on September 23.

“The name Lingling may sound cute, but the impact it has caused was devastating,” said Park Won-Soon, Mayor of Seoul, in the opening remarks. “Whenever typhoon hits Seoul, my staff and I would stay up all night in case of emergencies.”

On this occasion, the Seoul Mayor, together with 14 other city representatives, made a declaration that, in strengthening disaster risk governance, “we will establish governance strategies to promote commitment and cooperation of various stakeholders, aiming to ensure social and economic resilience so that cities can quickly return or exceed their original state after a crisis. In this process, we will strengthen relevant systems and provide administrative and financial support to maximize the contribution of city and local governments towards building urban resilience.”

Centered on the three questions “What is resilience?” “Why cities need resilience?” and “How to be resilient cities?” posed by Professor Jeroen van der Heijden, the forum session “Importance of Governance in Urban Resilience” gathered speakers and panelists from Europe and Asia to exchange their knowledge and experiences in the field of promoting urban resilience.

“Urbanization, globalization, and climate change are the three converging trends which have come to characterize the 21st century”, said Hero Novian, Head of the Section of Rehabilitation & Logistic, Fire and Disaster Management of the Indonesia city Bandung, “and urban resilience helps address two of them.”

The Swedish Government has combined disaster risk reduction, climate change adaptation, and sustainable development into its national strategy. It applies the risk-based approach to land-use planning for natural hazard risk reduction. The Government has approached all relevant departments for collaboration and organizes monthly gatherings to ensure that citizens – and animals – are updated with the latest information and are engaged as security guards for risks and disasters. In addition, all cities in the country have been required to develop their very own local resilience strategies by law.

However, through his experience of communicating with East Asian local governments, Shu Zhu, Regional Director of ICLEI East Asia, has noticed an insufficient level of awareness, understanding, and recognition of the importance of urban resilience at the local level in the region. In this regard, he suggested political leaders justify the necessity of enhancing cities’ capacity for resilience with cost-benefit analysis.

Meanwhile, Lyu Hyeon-Suk of the Korea Institute of Public Administration has noted a growing awareness of resilience among Korean citizens following two typhoon episodes on the peninsula. She firmly believes that “successful urban resilience requires good governance” and that, collaboration with key stakeholders is essential for improving urban resilience, as it allows for a structural coupling of the logic, values, and know-hows of different specialisms.

Ahmad Rifai of the Kota Kita Foundation believes that no one should be left behind in urban resilience. The Indonesian port city Makassar has been threatened by global sea-level rise. However, while the government has made its effort to relocate vulnerable and affected communities in the region into new areas, many of the residents eventually moved back despite climate hazards, as they had not been able to adapt to the new environment. With this example, Rifai highlighted the role of public participation in good governance for urban resilience.

Through the discussion, city representatives and experts in relevant fields have rethought the critical role of governance in advancing urban resilience. 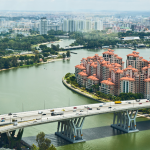 Moving from Disaster Response to Disaster Preparedness in China and ASEAN