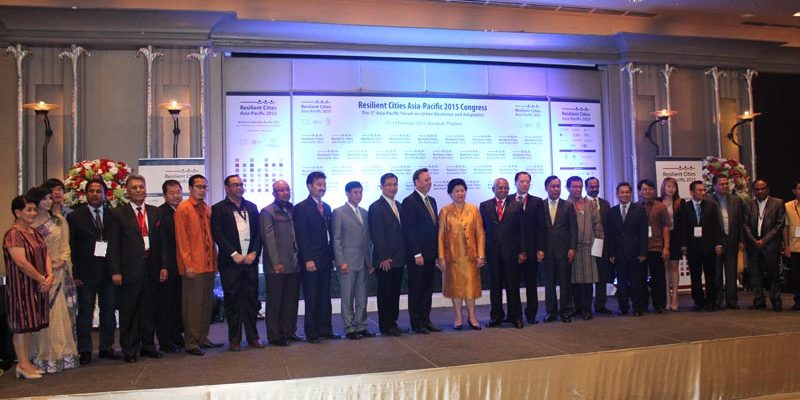 Over 300 delegates from around 30 countries and more than 100 cities, including key government officials from China’s Gui’an New District Administration Committee and Mongolia’s Ulaanbaatar Governor Office attended the Resilient Cities Asia Pacific 2015 (RCAP2015) held in Bangkok, Thailand, from on 11-13 February. Focusing on urban resilience and climate adaptation in the Asia Pacific region, the Bangkok congress was an extension of the annual global Resilient Cities Congress held in Bonn, Germany, since 2010.

“Name a disaster, and chances are high that the city in Asia has already experienced it. Flooding, storm surges, typhoons, earthquakes, and landslides are so common in this region that the word ‘extreme’ gets a different meaning each time a disaster strikes,” said ICLEI Secretary General Gino Van Begin in his opening address. “Cities have a responsibility to adapt to climate change, and [this forum] is an acknowledgment of that,” he said.

According to estimates by the United Nations, eight out of 12 disasters that happened between 2000 and 2010 took place in the Asia Pacific region. With its drastic increase in urban population, which is expected to reach 1.8 billion by 2030, climate change adaptation and urban resilience become one of the most urgent issues faced by cities in the region.

“There is a need to do things differently; to be prepared; to innovate; to constantly learn and adapt; and to enact the full spectrum of resilience actions, including disaster prevention, preparedness, response, and recovery, for current and projected risks”, state the “Bangkok Call for Action Towards Urban Resilience in the Asia Pacific” – a statement made by mayors and municipal leaders to commit their celebrative actions on climate change.

The Bangkok Call for Action will be delivered at the 3rd World Conference on Disaster Risk Reduction in Sendai, Japan where nations will decide on the disaster risk reduction framework for the next 10 years. It will also feed into the ongoing processes of finalizing the post-2015 development agenda, specifically the Sustainable Development Goals on cities and human settlements, the UN Paris Climate Conference in 2015, and the Habitat III in 2016.

Organized jointly by ICLEI, the World’s Mayor’s Council on Climate Change, and Bangkok Metropolitan Administration, the Congress consisted of panel discussions from the member of the World Mayor’s Council on Climate Change and high-level technical sessions on financial mechanisms, green growth, risk reduction, integration of resource management. It also saw the launch of the Asia Cities Climate Change Resilience Network, a guidebook for policymakers for pro-poor urban resilience in the Asia Pacific. Resilient Cities 2015 would take place again in Bonn, Germany, in June 2015.