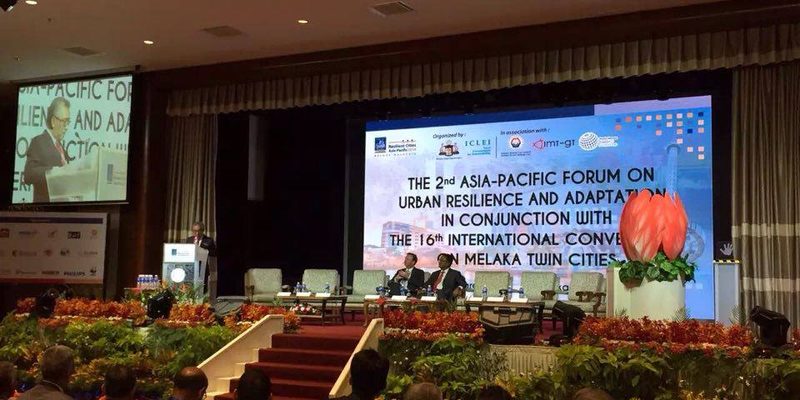 Shu Zhu, Regional Director and China Representative of the ICLEI East Asia Secretariat chaired the session on “Resilience Actions in East Asian cities” held on 2 March, where experts and city representatives from the East Asia region shared their experience and innovation in tackling risks and challenges brought or intensified by climate change.

Bolormaa Ganbold, Head of Environment and Green Development from Ulaanbaatar City, shared the challenges faced by her city and its future plans and solutions, particularly on cutting GHG emissions to tackle air pollution, implementing the 3Rs – Reduce, Reuse, and Recycle- principle to reduce waste, and adopting an integrated water management approach to ensure urban water security.

Tomoko Takemoto from Kitakyushu’s Environmental Bureau shared two best practices from her city: Hydrogen Town, the world’s first proof-of-concept energy model town to reuse hydrogen produced by factories as a by-product to generate energy for the public, commercial and residential buildings; and Smart Community Creation Project, where energy use per region are optimized via a smart management system that coordinates both current and new energy supply.

Ming-Der Chen, Assistant Executive Director from Pingtung shared his city’s experience in utilizing solar energy technology and how the once unused Guangtasi wetland is turned into a self-sufficient district by building long-legged houses and industries.

Representing Guangzhou, Weiju Lei, Deputy Director General of Guangzhou City, introduced the city’s institutional framework, regulations, and relevant awareness promotion activities on emergency management. Citing a recent snowstorm caused by a sudden cold wave from the north as an example, Lei explained how setting up an on-site operation office and shelters were effective in addressing train delays that affected over 100,000 passengers in the railway station.

Yu-fang Chen, Public Health Inspector, from Taichung introduced the city’s strategies and measures in responding to major disasters like typhoons and earthquakes. Some of the actions included conducting climate risk assessment and vulnerability study and developing a monitoring and warning system.