The concept of “Regional and Circular Ecological Sphere”, introduced and adopted by the Government of Japan in 2018, provides a framework for cities and regions in the country to explore integrated development approaches towards de-carbonization and localization of the SDGs.

As a follow-up of the session at the UN Climate Change Conference COP24, this year, the side event “De-carbonization and SDGs Localization: Challenge of Local and Regional Governments to achieve circulating and ecological economy” was held at the Japan Pavilion during COP25 in Madrid, to introduce activities and challenges of local governments working to improve the overall environment, society and economy through de-carbonization and SDGs localization, and hence, contribute to the UNFCCC discussion.

Moderated by Emani Kumar, Deputy Secretary General of ICLEI, the session gathered policymakers of national and subnational governments to explore how local governments in Japan, Finland, Germany, and China synergize de-carbonization and resource efficiency and work towards sustainability.

Cities are consuming 2/3 of the world’s energy while contributing to over 70% of the global GHGs emissions. “In order to achieve the SDGs, we need to fundamentally change our production and consumption pattern, from linear to circular economy, from fossil fuels to renewable energy, and from overexploitation to nature-based solutions,” said Ashok Sridharan, Mayor of Bonn and President of ICLEI, in the keynote speech.

The city of Bonn has recently adopted its comprehensive sustainability strategy, which focuses on six thematic fields, covering all areas of the municipality’s actions in urban mobility, climate and energy, social participation, and the use of natural resources. Mayor Sridharan believes that local governments are the keys when it comes to actively promoting and implementing new patterns of production and consumption.

The ambitious goals are supported by deep de-carbonization measures, carbon sinks, and a strong commitment to circular economy practices at the regional level. In particular, Turku’s target was made possible by such ambitious projects as wastewater treatment and purification plant which provides 14 municipalities with 10% of their overall heating and cooling requirements.

A joint study recently conducted by Turku and the Finland Future Research Centre has identified the main actors – including over 300 businesses – in accelerating de-carbonization measures and the development of circular economy initiatives in the surrounding region. The city government and ICLEI are currently working on solutions to engage more regional stakeholders.

Energy contributes to a significant amount of GHG emissions in cities. Yet it is challenging to cover all the energy consumption by local renewables. Collaboration with neighborhood regions to efficiently deploy renewable energy is therefore crucial for carbon neutrality. For instance, Yokohama, the second-largest city in Japan, is only able to generate an estimated 10% of its energy consumption within the territory. To make the impossible possible, Yokohama has been working closely with 12 municipalities with high renewable energy potential in the Tohoku Region. Wind power generated in Aomori Prefecture is sold to companies and educational institutions in Yokohama, which has not only contributed significantly to the overarching goal of de-carbonization but has also contributed to local economic development in Aomori Prefecture.

Similar practices are also carried out in other regions in Japan. The Fukushima Daiichi nuclear disaster following the 3.11 earthquake in 2011 has made the Nagano Prefecture Government re-consider the urgency and necessity to make the region energy self-sufficient.

“To ensure sustainability, the priority is not only about reusing energy or increasing the production of renewable energy but also benefiting the local people,” said Soichiro Muroga, associate director of the sustainable energy policy division of the Nagano Prefecture Government’s Environmental Department. The prefecture has, therefore, developed a virtuous cycle by sustainably utilizing local natural resources and generating revenues to benefit local residents. For example, hydropower produced in Nagano Prefecture is being sold to schools located in Tokyo, with the revenue it generates re-invested in renewable energy activities in the prefecture. The practice realizes the circulating and ecological economy—optimizing carbon and resources circulation at the most economically and socially efficient scale.

Transportation as an Action Area

Transportation is another key area of action local governments are targeting. As one of the national low carbon development pilot cities in China, Shenzhen, the fast-growing megacity, is the world’s first city with a fully electric bus fleet by 2018, and soon, all taxis in the city will be electric as well. In realizing low-carbon city development, Dong Wang of the Shenzhen Research Centre on Climate Change highlighted the importance of engaging and benefiting local communities and the young generation.

The Japanese city Toyama also sees transportation as a key sector for linking de-carbonization actions and localizing the SDGs. The city focuses on revitalizing public transportation and the central urban area as a means to encourage its citizens to reduce their reliance on private vehicles, while still having easy access to the city center for economic activities.

In addition, the city is developing a platform among energy companies to efficiently coordinate a variety of energy sources for transportation, and Toyama is keen to share its technologies with other cities abroad. For instance, the city has exported hybrid dual engines to support Indonesian cities in reducing GHG emissions.

Public Engagement: the Key to Success

While local governments are playing a leading role in coordinating the above-mentioned initiatives, the representatives all agreed that the public should be engaged and take an active role in achieving the de-carbonization and sustainable development goals.

“Cities are built for people. Many citizens are aware of what it’s happening out there, but it is important to close the gap between ‘knowing what to do and ‘taking action’” said Agnes Schöfelder, head of the climate protection control center of the Department of Climate, Environment and Nature Protection of Manheim. The Municipality of Mannheim has the budget prepared for citizen engagement activities, so the public could participate in the decision-making process on which measurements they’d like to apply in their city.

The Mayor of Turku also highlighted that local governments cannot achieve ambitious goals by themselves. “We need our citizens, our businesses, our cooperating partners in the area to do the work with us,” said Mayor Arve.

The Japanese city Kyoto is actively searching for better solutions for utilizing renewable energy produced in the rural area via the cooperation platform among citizens, NPOs, researchers, and businesses in the city. Moreover, Kyoto sees young leaders as key stakeholders. “We are empowered by the future generation”, said Takeshi Shimotsuma of the Kyoto Municipal Government, “the younger generation is likely to be influenced by climate change the most, and they will be taking the lead into a de-carbonized society and future.” In fact, students in Kyoto have been active in the climate movement, and the city government, in return, has been welcoming to dialogues with leaders of the next generation.

Bonn (Germany), Turku (Finland), Yokohama, and Nagano Prefecture (Japan) are members of ICLEI’s Green Circular Cities Coalition, recently launched during the Shenzhen Low Carbon City Forum. The Coalition recognizes that circular economy approaches are crucial and must be taken to realize the vision of a carbon-neutral society. The Coalition provides a platform to connect cities, experts, businesses, and other relevant stakeholders to foster urban circular economy transitions through knowledge and experience exchange, mutual learning, and technical support. 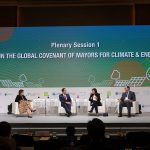 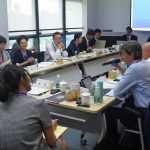 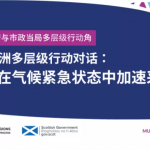