Shenzhen Guangming New District has officially joined ICLEI—Local Governments for Sustainability as a new Chinese Member. ICLEI warmly welcomes the district and hopes to develop closer cooperation with it on sustainable development.

After the visit to the Onamawashi Reservoir in Japan, accompanied by ICLEI Japan, Bin Kuang, Director General of Guangming New District Management Committee led 10 delegates from the district and visited the ICLEI East Asia Secretariat in Seoul, South Korea on 9 August 2017, and was warmly welcomed by Shu Zhu, Regional Director of ICLEI East Asia.

An induction ceremony for ICLEI membership was hosted in the Seoul Global Center for Guangming New District. Soyoung Ahn, Environmental Policy Division Officer of Seoul Metropolitan Government, and Tony So. Jun, Officer of the Seoul Urban Solutions Agency also came to congratulate the district and ICLEI on the occasion and shared Seoul’s experiences in the field of low carbon development and energy transformation.

Located in the northwestern area of Shenzhen City, Guangming New District was founded in 2007. As a young district, Guangming has followed the values of green, low-carbon, and sustainable development. By joining ICLEI, the District looks forward to pushing forward sustainable development through knowledge exchange and cooperation with cities worldwide via ICLEI’s global network.

Shu Zhu appreciated Guangming New District’s efforts in green and sustainable development, and the fruitful achievements the District has achieved in moving towards a sponge city. Guangming New District has confirmed its participation in the 10YPF on SPP Working Group 1A Project led by ICLEI. The 2-year, launched in June 2017, is designed to support Chinese and Korean local governments to enhance their performances on green public procurement.

ICLEI will provide further support to the long-term sustainable development plan of Guangming New District by assisting the district to develop capacity and promote innovation; providing advice on urban development solutions and guidance on methodologies, tools, and guidelines; and bridging the district to ICLEI’s global network of local governments, experts, organizations and relevant industries. 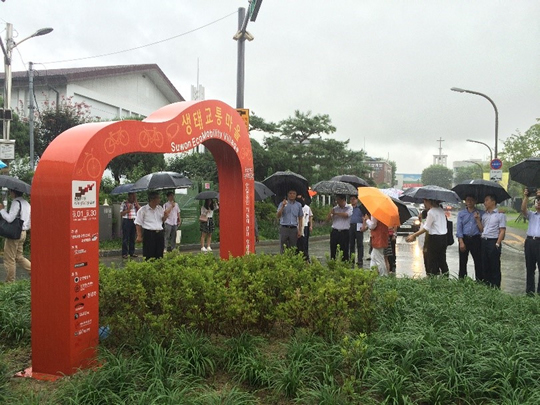